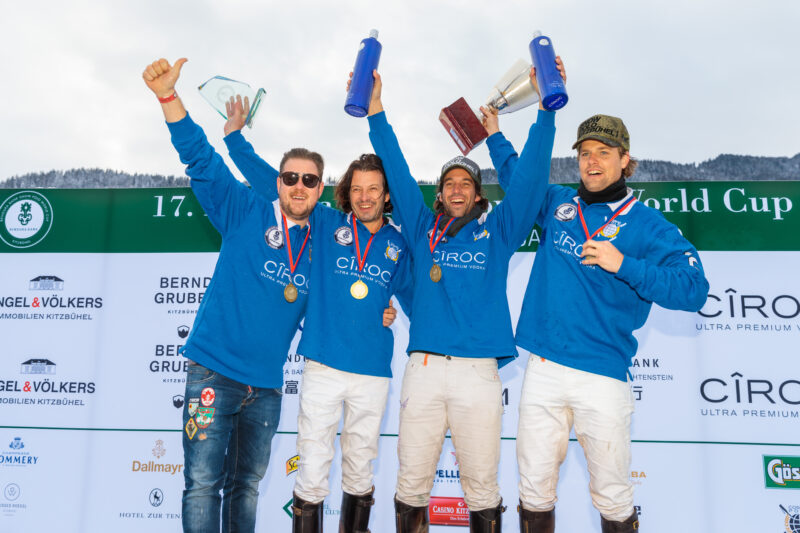 In the beautiful and pictoresque village of Reith bei Kitzbühel in Sud Tirol Austria, the famous snow polo teams and thousands spectators gathered for the final day of Snow Polo in the 17th Bendura Bank Snow Polo World Cup.

The glorious winter sun was shining directly in the polo field with the first match of the day as Bendura Bank ( winner at last year’s edition) won against the Maserati team. Captain Melissa Ganzi was the only female player in the snow polo tournament, scoring every one of the 15 yard penalties. Argentine Alejandro Novillo Astrada scored another three goals and when the match came to an end, Swiss national team player and Kitzpolo event organizer Tito Gaudenzi gave his team their final goal, to become in fifth place.

The second match for The Kitzbühel Country Club Cup Subsidiary Final gave the trophy to Corum over the Bernd Gruber team.
The third and final match of the day was the 17th Bendura Bank Snow Polo World Cup Final. Engel & Völkers, four-time finalists and only one-time winners, were set to be favourites but Cîroc’s team captain Sebastian Schneberger, Aki Van Andel and his 7 goal team mate Valentin Novillo Astrada scored many goals. Engel & Völkers ‘Red Devils’ Captain Kutlay Yaprak (who qualified to the final also last year), Adrian Laplacette Jr, and Agustin Kronhaus knocked it off concentrating in skills and horsepower but always blocked by the ‘Most Valuable Player ‘ Aki van Andel  whose pony made sure Novillo Astrada had a clear run for the ball.

The 17th Bendura Bank Snow Polo World Cup 2019 was for the team fighters Cîroc and Captain Sebastian Schnerberger said after the Final, “This was agreat event and I’m so happy we’ve walked away with the title. It was a tough match, but we rallied together and did what we came here to do.”

Event Organiser, Tito Gaudenzi continued, “What an exciting weekend this has been. Our team may have not made it to the Final, but this year’s tournament has been the best yet, with record crowds and fantastic players. I can’t wait for next year’s edition and we hope to welcome everyone back for the 18th Bendura Bank Snow Polo World Cup. But for now, off to St. Moritz!”

Kitzbühel Polo was started by Reto and Tito Gaudenzi, whom both operate polo events around the world. To day Lifestyle Events & Companies operate Kitzbühel Polo, which is lead by Tito Gaudenzi, who apart from being a polo organizer is also a successful polo professional. Kitzbühel Polo is a partner event with Miami Beach Polo, St. Moritz Polo, Baku Polo as well as Grand Champions Polo Club, Wellington and Aspen Polo.
In 2016 the first Polo Club Kitzbühel was founded and will function as the official host of the Bendura Bank Snow Polo World Cup Kitzbühel.

In the U.S., snow polo is held exclusively in Aspen. With the breathtaking 12,965-foot summit of Mount Sopris as a backdrop, Aspen Valley Polo Club is one of the busiest and fastest growing USPA-sanctioned clubs in the nation with a membership increase of 75 percent over five seasons. Since Marc and Melissa Ganzi founded the club in 2014, polo has increased in popularity in Aspen and surrounding cities with the club’s offerings of various weekly grass and arena tournaments, Gladiator Tuesdays and Asado, Kids Polo, The Polo School and Polo On Demand.

Melissa Ganzi won the 16th Bendura Bank Snow Polo World Cup Kitzbuehl 2018. It was an impressive 10-61/2 victory over Engel & Völkers. Ganzi was honored to make snow polo history for the second time in three years as the 1st American woman to win the Kitzbuehel tournament.

Photos by ZC and Kitzpolo.